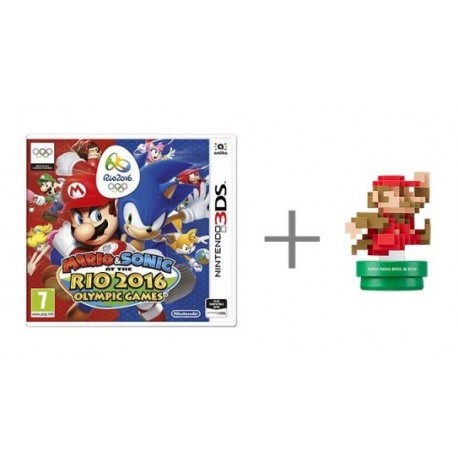 This product is a special game pack and amiibo figurines. This is not an official limited edition.

Compete with Mario ™, Sonic and all your favorite characters in Rio de Janeiro, the 2016 Olympic Games City.
Compete for your competition and find out if you can overcome even the most vicious rivals in disciplines such as football, rugby or beach volleyball.

Mario, Sonic and a wide range of other guest characters will compete for the Olympic gold medal in the tens of exciting sporting disciplines at Mario & Sonic at the Rio 2016 Olympic Games. In the virtual Rio de Janeiro, which has become the host of the 31st Olympics for 2016, this latest addition will feature 14 Olympic disciplines as well as 14 other specials to deliver classic athletic performances to the right Mario and Sonic.

Whether you choose any mode of your favorite sports, you can rely on the fact that at the stadiums in Rio you will meet a really strong representation of athletes from the Mario and Sonic series. In addition to well-known medalists such as Yoshi or Amy Rose, the Olympics will honor the participation of another twenty new athletes, such as Rosalina or Rouge, who will expand the local list to 40 playable contestants.

Aspirational athletes dreaming of laurels and medals can then embark on Road to Rio fashion and in their little skin, not only to invite the world's sporting elite, but also to join in the rivalry of rivalry between the gyms conducted by Maria and Sonic itself. It will only be for the players to which the team will be added and for the unique story events on their way to the summit. By completing this story mode, Mario or Sonic Mii dresses will be made available according to the color of the Olympics.